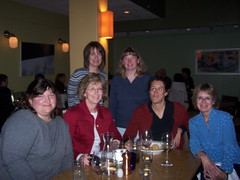 100_6276
Originally uploaded by tometrekkers
We had a great "children's writers dinner" in Iowa City last night. Barbara O'Connor (seated on the far right) was our guest of honor. And I'm going to post a picture of us before I forget how to do that (it's really not that hard...I don't know why I don't post more pictures on my blog). That's Britt (left) and me (right) standing in the back. I wonder if she's standing on her tiptoes? I always thought she and I were the same height...funny how I delude myself like that. Seated next to Barbara (from left to right) is Wendy,

Most of us went to hear Barbara's presentation at Longfellow Elementary yesterday early afternoon, which was a treat. I always enjoy watching someone else's school visit presentation. Barbara does a lot of the same things I do. I thought the same thing about David Patenaude when I saw his presentation last week. Yet all three of us have very different presentations.

We're lucky here in Iowa City...we get a lot of visiting authors. And from my perspective, what's even luckier is I live in a community with wonderful writers WHO LIKE TO GET TOGETHER! We just had dinner with another visiting author (Beckie Weinheimer) a couple weeks ago...unfortunately, I forgot to bring my camera that night, so I have no documentation of the event. She'll just have to come back so we can do it again and I can take a picture then. The thing about children's writers is you get a group of us together, we're all best friends by the end of the evening.

One of things we talked about at our authors dinner last night was selling a proposal vs. having a 2-book contract (where the second book is unknown). I've never had a 2-book contract, but a number of my most recent contracts were sold just on a proposal.

Maybe it is better to sell on a proposal? I'm still secure in my knowledge that the publisher believes in me and wants to keep working with me...and as an added bonus, I know they actually want what I'm working on!

The only problem with selling a book on proposal is sometimes when you start writing you end up wanting to take the book in a whole new direction from what you proposed...that's what happened with Yes, I Know the Monkey Man. My editor wanted the book I proposed, not the book I actually started writing. I was really at a loss when she didn't like where I was going. I started to wonder whether selling a book on proposal was really so wonderful. Maybe it would've been better if I'd been writing on spec? Then I could write the book however I wanted to write it...but of course, I may never have sold it.

In the end, I resolved the issue by asking my agent to read my original proposal and my brand new proposal...my agent agreed with my editor, so I went back to the original proposal. It took me a while to get back into it...I really mourned that new proposal (the story that would never be). And then when I did get back into it, I was almost too stressed to write because that deadline was looming and I knew I wasn't going to make it. I'd wasted too much time going off on my tangent. Fortunately, there was plenty of time built into the schedule, so even though I missed that first deadline, the book did not have to be pushed back. And ultimately, I'm happy with how the book turned out.

My agent has been waiting patiently for me to finish something new that she can shop around to "bigger" publishers (a new publisher isn't going to to give me a contract on a proposal)...and I've been fantasizing that maybe if I got in with a larger house, perhaps a 2-book contract would come my way? But do I really want that 2-book contract? Do I even want to work with a larger house?

I guess as long as my current publishers are willing to give me contracts based on proposals, I have no reason to go elsewhere. But in this economy (plus there have been changes at both houses I've sold proposals to), will they still be willing to give me a contract on just a proposal?

Maybe it's good to work both fronts? Hmm...I think that means I've got my NaNoRebel goal. I've already got a proposal sitting at Peachtree, so we'll see what happens with that. In the meantime, I will finish my series proposal for Albert Whitman and I will revise I Am Anna Winkler so my agent can hopefully send it out. I don't know if it's realistic to accomplish both those goals in November or not (I haven't even reread I Am Anna Winkler in well over a year...and I don't know when I'm going to get my last chance to fix anything that's wrong with Yes, I Know the Monkey Man, nor do I know how long that's going to take me)...maybe I should shoot for finishing these two things by Christmas?