I still can’t believe I was actually there…but I was! I even wore a skirt. I had to actually go and buy the skirt a couple days before ALA because I didn't own one. I had a little black dress that I bought for our cruise a couple years ago. It probably would’ve been appropriate for the banquet, but not for the exhibition hall. And I didn’t want to have to go back to the hotel to change, so I went shopping (one of my least favorite activities). But it was okay because now I actually own a skirt should I ever feel inspired to wear one again. (Wow...did I actually write an entire paragraph about CLOTHES???)

Okay…the banquet. It was held at the Sheraton in downtown Chicago. Beautiful hotel, overlooking the Chicago River. There was a cash bar reception kind of thing up the escalator, outside the ballroom for an hour before the banquet started. Lots and lots and lots of people milling around. Though I am someone who has zero interest in clothes, I…checked out what everyone else was wearing. I noted that I would not have been the only one in pants had I chosen to wear them; I also noted I would not have stood out in my little black dress, either.

Aside from the four people from Albert Whitman & Co., I only knew two other people who were supposedly at the banquet somewhere (and one of those four from AW & Co. I only met about two minutes before we went up the escalator), but there were so many people there that I never found the other two people I knew. I did manage to make conversation with people I’d never met before, though (thank you, Toastmasters!). Normally I would’ve been extremely overwhelmed in such a crowd (all those bodies, all that NOISE!), but I actually found it exciting to be surrounded by all these movers and shakers in the children’s book publishing world. Most people were not wearing name tags, so I had no idea who I was standing next to most of the time…it was fun to imagine, though. It was also fun just listening to snippets of conversation that were going on all around me.

Then the big doors opened. Oh. My. God. I have never in my life been inside such a huge ballroom. And that ballroom was full of tables. There were several rows of chairs way at the back where we walked in…I think anyone could come in and sit there to hear the speeches. And then past the sea of tables was a long table up on a platform…that’s where the award winners and the big ALA people sat. There were huge screens so you could see the speakers from wherever you were seated.

It took a while to find our table. There were ten people to a table…and I tried to count up the tables to figure out just how many people were there, but the room was so big I couldn’t actually see all the tables. There had to have been at least 1200-1500 people there, though.

It sort of puts the whole ALA experience into perspective...it costs $94 just to come to this banquet (not that I paid that...my publisher did!), so I'm guessing only a very small proportion of the people who were at the convention actually come to the banquet. So how many people come to ALA???

At our table there were the four Albert Whitman people, four librarians, an Albert Whitman illustrator and me. I'm not sure it's possible to find two librarians I had more in common with than these two I found myself seated between. I could have (and did!) talked to both of them all night long. I bonded with the one before we ever sat down because she’s a ukulele player and I’m a mandolin player and I sometimes play with uke players (how in the world did that even come up between two total strangers? Especially so early in a conversation. I have no idea…)…she wanted to know what kind of music I play. When I told her I play 18th century music, Renaissance music, Medieval music, that caught the other librarian’s attention. She sings Medieval and Renaissance music. She’s been a member of the S.C.A. since she was thirteen and she wanted to know whether I was a member, too. I’m not, but I have thought about joining. She was a Latin major in college and in a lot of ways she was like a female version of my oldest son. So she was very easy to talk to. Both librarians are also into dogs…and into library therapy dog programs! One actually has a therapy dog program at her library, the other would like to start one…I am in training to participate in such a program…like I said, I could have talked to these people all night long…and we didn't even talk about children's books (except for the series I'm working on).

Now for the food…because I am all about the food, anywhere I go. This was at my place when I sat down: 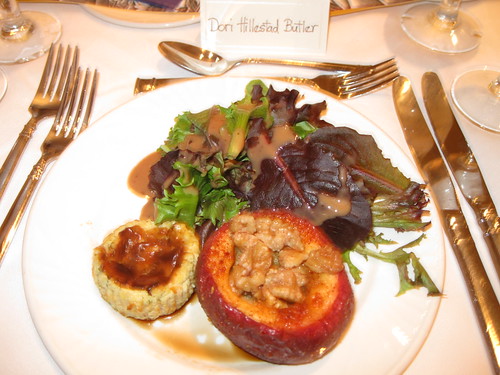 The salad is pretty self-explanatory…basic spring greens with a vinaigrette of some sort. The red thing at the bottom of the plate is a whole cooked apple with cinnamon and toasted walnuts (really, really good!) and I couldn’t tell you what the other thing on the plate was. I ate it all, though (and might’ve eaten a second, if it was there…though it was kind of rich, maybe even a little cheesy?) No idea what it was… 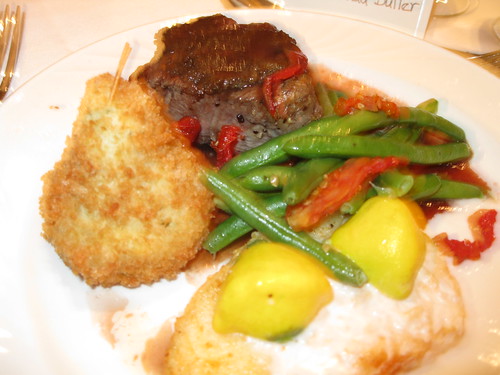 Steak…green beans with sun-dried tomatoes (or were they toasted red peppers? Now I don’t remember), fish with some sort of cream sauce and a pair of miniature squash on top, and the thing that looks like a deep-fried pear was actually mashed potatoes with herbs, sour cream and who knows what else, inside that little crispy coating. Really, really good!!!

So now I had a dilemma. Do I eat the steak or not? Four months ago my husband and I switched to a mostly vegetarian diet. I still eat fish and chicken a couple times a week, but I don’t eat pork and I hadn’t been eating beef…though I did have steak at my in-laws a couple weeks ago…I was trying to decide whether I really wanted to give up beef completely. I’ve always really liked steak…but it had been a long time since I’d had beef when I had it at my in-laws. It really didn’t taste as good as I remembered, so at that time I decided I was going to give it up. But now that I was at the Newbery banquet, I decided to take one bite and THEN decide whether or not to eat it tonight. Oh man…that was a GOOD steak. So I ate it…all of it. I was a member of the clean plate club.

And look at this: 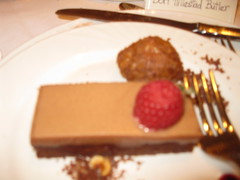 CHOCOLATE for dessert! A perfect end to a perfect meal.

I have to say, the wait staff whisked those plates in and they whisked them back out again really, really fast. (That, or I was just talking too much…everyone else was done when the dessert came and I still had half my food left, so I had to hurry up…) 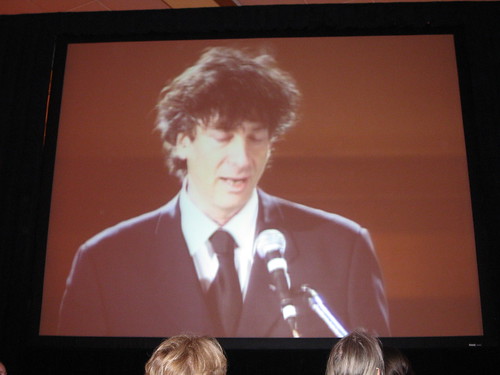 Each of those speeches was really inspiring…I’m glad there were CDs of the acceptance speeches at every plate, so I can go back and listen to them again anytime I want to. Though Beth Krommes is an illustrator and I am a writer, I could really relate to much of what she had to say…especially when she spoke about her family. She was very warm and down to earth…and she reminded me of an illustrator friend I have here in Iowa City. I could relate to a lot of what Neil Gaiman had to say, too…especially when he talked about having an idea that you know is a good idea, but you’re just not good enough to write it yet (that was him and The Graveyard Book…and it’s me and my science fiction mystery…hey, does that mean one day I’ll be accepting a Newbery award for my science fiction mystery???)

Ashley Bryant gave the last speech…and believe me, NOBODY slept through that (not that anyone would've slept through the rest of the evening...). He had us all reciting poetry. He’d say a line and we’d repeat it after him…with rhythm and diction…it made me wish I knew more about poetry. And what that man can do with his voice…the volume, the expression, the pitch, the diction, the way he holds on to parts of some words and lets go of others…well, let’s just say I still have a lot to learn at Toastmasters. Actually, just about any Toastmaster I know could learn something about voice from this guy…and did I mention he’s 86 years old?!?! You’d never know it by the way he spoke…or even by the way he looked. I would’ve guessed 60 tops.

After the speeches, a Martin Luther King, Jr. video played on the big screens while the winners filed out. The guy who was giving me a ride back to the hotel asked if I wanted to stay for the “receiving line”…I was a little curious what the receiving line was. But it was late…and I was tired…and when I looked around the room and realized how many people there were to go through the receiving line, I kind of wanted to skip it. Besides, I knew my roommate would be waiting up, anxious to hear every single detail…and I wasn’t even sure what I was going to tell her. How do you describe a banquet like this???

Well…I guess I just did.