I had to think about whether I really wanted to blog about Rusty or not. We didn’t have Rusty for very long (not even a month)…and frankly, Rusty is a dog I would like to forget. But I can’t forget him…and I certainly learned an important lesson from him. So…here goes. (It’s a pretty sad story, so if you’re not up for that, you better stop right here.)

This is the only picture we have of Rusty: 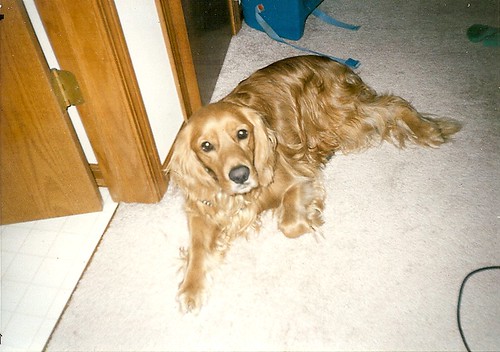 We got him right after we got a house of our own in Cedar Rapids. By this time I’d decided it was better to get a dog from the P-O-U-N-D (see Buddy Files book 1) than to get a purebred. Except Rusty didn’t actually come from the P-O-U-N-D. I still remember the ad that appeared in the newspaper. Well, I don’t remember the specifics about age, breed etc…this is the part I remember: “Save a dog’s life. If no one wants this dog by Saturday, he’s going to the pound!” What a bizarre thing to put in an ad, eh? But I was all about saving a dog’s life, so I called the number…and we went to see the dog. We weren’t invited inside, the woman came out with Rusty. I remember she was really nervous, and we could hear yelling coming from inside the trailer. I asked why they were getting rid of the dog. She said, “my boyfriend doesn’t like him.”

I remember I tried not to be obvious about my raised eyebrow. (Hello? Boyfriend doesn’t like the dog? Dump the boyfriend, not the dog!) And then she sort of grabbed my arm and said, “Please take him…he’s a really nice dog.”

He seemed like a nice dog…so we took him.

The first thing we noticed about Rusty was he had a “submissive peeing” problem. It wasn’t all the time…just when my husband came home. Or walked into a room. My husband is not a violent man, but for some reason, Rusty kind of cowered around him. We suspected (though never knew for sure) that maybe the boyfriend had actually been abusive to the dog…but that didn’t bother me. Rusty was out of that situation now and he was going to have so much better of a life with us.

Then Rusty bit the neighbor boy. I was shocked when I heard it. Absolutely shocked. Rusty was a pretty fearful dog…we had never even heard him growl at anyone. I couldn’t imagine him biting anyone. No one saw it happen. The kid had come over on his own when Rusty was out in the backyard. And well…I could imagine a situation where the kid had maybe taunted Rusty…maybe even hit him with a stick? Rusty had always been really good with our kids (and my youngest wasn’t even a year old at this point). So…we decided we wouldn’t do anything at that point.

I was there for the next incident a week or so later. It happened right in front of me…this time to my 10-month old child. I had just pulled the tray off the high chair and set it on the table. I was about to wipe my child’s face and hands when Rusty charged in between me and Andy and…attacked him. For absolutely no reason. I was standing right there…I know Andy didn’t pull his hair or anything. The dog just freaked out. I was able to pull him off before much damage was done, but those few seconds would definitely rank in the top five of worst moments of my life.

I locked Rusty in his crate in the basement and took my son to the hospital. That was the last time I saw Rusty.

The worst of the bite was right around my son’s eye. But he was very lucky…he didn’t even need stitches.

The doctor told me the dog would have to be taken in to a vet where he would be watched for rabies…and then, because he’d bitten two people, he would likely be put to sleep. Fortunately, my husband took care of all of that for me because I couldn't do it. I couldn't do any of it. I couldn't look at the dog...I couldn't take him to the vet...I couldn't even talk to the vet on the phone. It still upsets me terribly to remember all this.

I remember I had plans with friends that night. At first I wasn't going to go, but my husband talked me into it. He thought it would do me good to get out of the house. So I went, but I doubt I was very good company. It’s funny how well I remember all of this…it was 15 years ago! That day left a very strong impression on me. I can tell you what I was wearing...what my 10-month-old son was wearing...what he ate for lunch...what the weather was like...everything!

It was a big shock to discover that I couldn’t save this dog. But I couldn’t…not at the expense of my child. I still wonder if a single woman had answered that ad if things might have been different for Rusty? I do believe he was abused…could someone else have saved him? Maybe…maybe not.