I’m back from Venice. Okay, I didn’t really go to Venice, I went to San Antonio. But I felt like I was in Venice. This is the convention center: 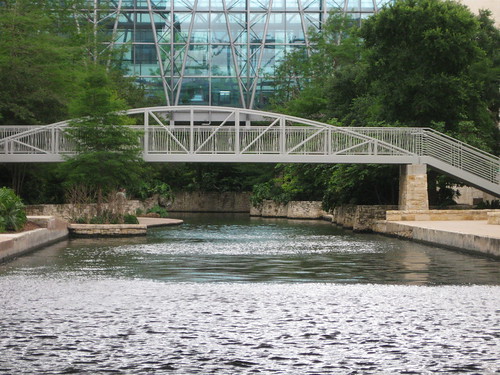 This is where I stayed: 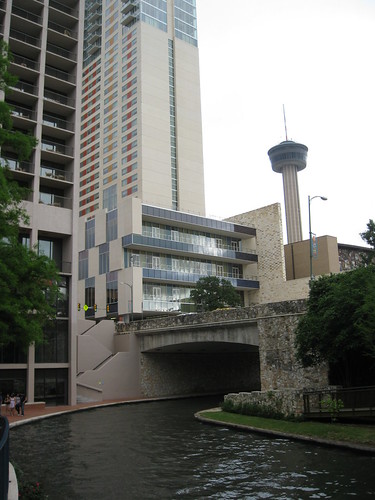 And this is the Alamo (because you can’t go to San Antonio without seeing the Alamo): 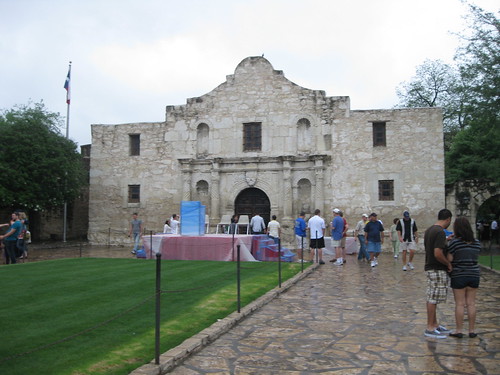 Just about everywhere I went, I walked along this beautiful riverwalk to get there. 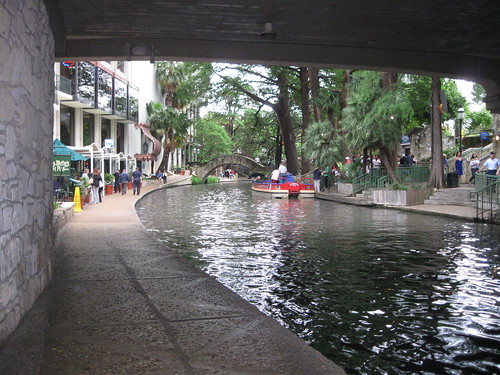 And unfortunately, I didn’t walk much because it rained most of the time I was in San Antonio, which apparently is very unusual….I lost count of how many people apologized to me for the weather, like it was THEIR fault!

2. Dinner with my Minnesota friend, Laura, at the most eclectic Italian restaurant on the planet. (Hey, Laura…if you’re reading this, I found out how deep the water is – 4-5 feet where we were most of the time, but 20 feet down by the restaurant! And no, I didn’t find out through an up close and personal experience…a local told me!)

3. Meeting other authors who publish with the same houses I do. There’s sort of an instant kinship between people who share editors/publishing houses etc.

4. Meeting other authors who DON’T publish with the same houses I do.

5. A chance meeting with a librarian who goes to Uganda for three weeks every summer to build libraries. Sometimes she brings authors with her. She said to me, “you wanna come sometime?” I said, “YES!!!!” I wonder how serious her invitation was? I wonder if she realizes I was serious when I said yes?

6. Hanging out with the people from my publishing houses.

7. The Bluebonnet awards luncheon (again, it was like the Newbery award dinner at ALA…there were at least 1,000 people there!). I chatted with a really cool librarian who built nukes in a previous life…not that I have ANY desire to build nukes whatsoever, but I enjoyed her stories! Help Me, Mr. Mutt (which is one of my all-time favorite picture books!) by Janet Stevens and Susan Stevens Crummel won the Bluebonnet award. KIDS presented the award (and those kids were wonderful, btw…really poised and articulate!)…and I loved Janet and Susan’s presentation.

8. Dinner with the Albert Whitman people and several librarians. (I LOVE the fact that my publisher sets up these dinners)

10. Signing…signing…signing. I signed A LOT of books at TLA. In fact, on Saturday, I just wandered back to the Albert Whitman booth to let them know I’d met up with some friends of friends who invited me to join them for lunch…and I ended up sitting down for about 45 minutes and signed MORE books.

11. Galleys!!! I didn’t have a lot of time to wander the booths at TLA, but I still managed to pick up a few galleys, including April Henry’s Girl, Stolen, which I’m looking forward to!

12. I came home with more business cards and e-mail addresses than I ever have from anywhere else (like I said, people were VERY friendly at TLA!)…and 46 people picked up my brochure, so maybe I’ll have a return trip to Texas one of these days?

So I still have a couple galleys of Buddy #1 left. And since I made you all look at some of my travel pictures (is there anything worse than someone else’s travel pictures?), I thought I’d do a drawing here on my blog for one of my remaining galleys. If you’d like to have a chance to win one, leave a comment before Thursday. I’ll gather up all the names, put them in a hat and let my teenager draw one. I’ll announce the winner here.
Collapse