Well, I've been really GOOD about updating my personal journal in recent weeks...but really BAD about updating my blog. A friend said to me, "you call your blog 'A day in the life of a children's book author' and you don't blog about one of the most significant days in your career???" Well, when you put it that way...okay, here goes:

Wednesday morning started out like any other morning: I checked my e-mail, sent my dog out to retrieve the newspaper, had breakfast, took a shower, came back and checked my e-mail again before getting to work. In the middle of my unread e-mails was an e-mail from

sarah_prineas. Two of them, actually...but the one that caught my eye had Edgar! as the subject line, and I could read the first line of her e-mail before actually opening it. It said, "I assume you've seen"

Seen what? I wondered. Is someone we know on this year's list?

I opened the e-mail, clicked on the link and...well, according to my husband I SCREAMED when I saw that I'M the one who has a book on the list. But I think I was way cooler about it than that. I think I may have just said very softly, "Wow, that's very nice." I have absolutely no idea why he came barreling down the stairs thinking something was wrong.

I was so stunned that I didn't actually trust

sarah_prineas's link. (She wouldn't toy with me like that, would she?) I had to go to the Mystery Writer's of America's website and click through all the links to find it myself. Sure enough. There it was again. Buddy Files #1 really was a nominee in the juvenile category. 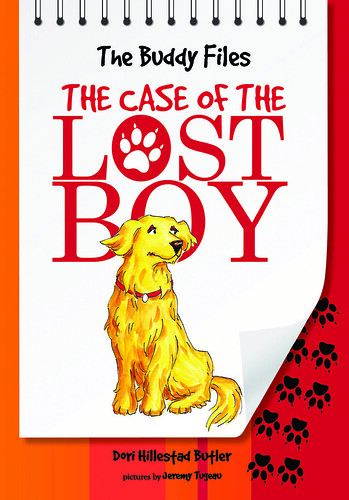 I saw I had e-mails from other people, including

kelcrocker, congratulating me, but there was nothing from my publisher. They're always on top of things like this. If it's a minor thing they e-mail...if it's a major thing (like getting on the Texas Bluebonnet Award list), they call. So I took the initiative and e-mailed THEM. I figured the reason they hadn't called was they didn't know yet...so I e-mailed both my editor and my marketing director and said, "Where's my phone call? (smiley face)" That was it.

The first phone call came about twenty minutes later...and as soon as I got off the phone with the marketing director, the editor called. They did not know what my e-mail meant...but they're resourceful. They found it before they called me. I think they were as shocked as I was. The marketing director said she had to talk to some friends to see what it means. (Hey, I KNOW what it means...it means I'm an EDGAR NOMINEE!!! That's all I really need to know...)

I've always dreamed of having a book nominated for an Edgar award. More than I've dreamed of having a Newbery or Newbery Honor book. I know who I am and I'm not a Newbery author. I don't write the kind of book that wins the Newbery. Some might look at my body of work and wonder if I really write Edgar books...but I'm a huge mystery reader (always have been!) and I've always wanted to make a name for myself as a mystery author. I told a favorite professor in college that I wanted to write middle grade humor and YA suspense novels. (I'm just now finally getting around to writing my first YA murder mystery...)

So yeah...this is HUGE for me! I always read the juvenile and YA Edgar nominees each year. Often I've read several of them before the announcement is even made. In fact, I usually do an article on the juvenile and/or YA nominees for my children's book review column in the local newspaper each year. I've even been on the committee that chooses the juvenile Edgar award (but I have since let my MWA membership slide...perhaps I should renew?)

It's funny...I went to a party right before Christmas and the hostess gave us all a bottle of wine from a local winery (yes, there are wineries in Iowa!). It's called "Storyteller," which I think is a great name for a variety of wine. I thought about just keeping that bottle on my desk because it's kind of a pretty bottle, but then decided we'd open it on New Year's Eve. But when New Year's Eve rolled around, I FORGOT about it. I think something must've aligned in the stars such that I would still have it on Wednesday because that was a much better day to open it.

My husband and I probably should have toasted Edgar Allan Poe (the Edgar nominations are always announced on his birthday. He would've been 202 this year, if anyone wants to know) and my publisher, but we just toasted me. I think we're going to go out and celebrate tonight. Depending on where we go, the teenager may even give up hanging out with his friends to join us, which shows that even he knows what a big deal this is.

Certainly, I'd like it if Buddy actually won, but it'll be okay if another book wins, too. It really is an honor just being nominated. And I'm in some very good company.
Collapse