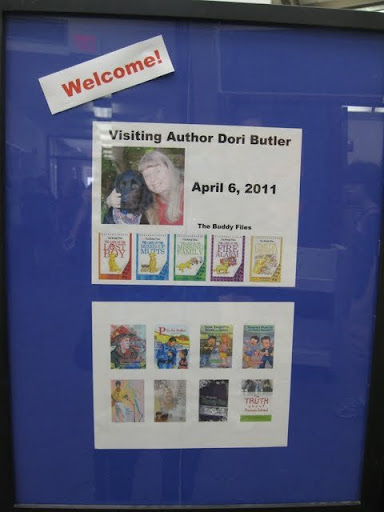 Apparently I visited the subversive school in the district today. (All the schools I'm visiting this week are part of the same district.) If you read my blog entry yesterday, you know that because a parent challenged James Howe's The Misfits a few years ago (and won!), the district decided not to even offer my Truth About Truman School book for sale. Because there's a RUMOR in my book that someone could be gay. (One of the characters also has two gay uncles, but I'm not sure the librarian realized that yesterday.) I have news for people who object to their children knowing that homosexuality exists: it STILL exists, even if you don't talk about it! If your children are in school, they are in school with people who are gay. Doesn't everyone deserve to see themselves in literature???

But I digress...back to the subversiveness. While this school was not allowed to SELL The Truth About Truman School, that didn't stop several fifth and sixth grade teachers from reading it to their classes!!! Nor did it stop them from encouraging their students to go out and order the book somewhere else and bring it back for me to sign. I signed quite a few copies of The Truth About Truman School! Look, they even included that book on their welcome sign.