A producer and camera guy (Greg and Ivaylo) from Open Road Media came from New York to film me last week. The purpose of their visit was to create video that will be used in multiple promotional pieces that will be available online and with the purchase of the e-book editions of Buddy Files. Each video is only going to be two minutes long, but six months from now Open Road will create a new video. And six months from then they'll create another one. So they needed to shoot a bunch of video they can reuse in all these pieces.

All this filming was originally supposed to happen in New York when I was there for the Edgars. They were going to do a studio interview and then they were going to "rent a dog" and we were going to go to a park and the dog and I would solve a mystery together. But the day before I left for New York, they called to cancel because 1) it was supposed to rain the day we'd scheduled, which meant we wouldn't be able to film in the park. And 2) I only had three hours available, which they didn't think was anywhere near enough time anyway. So they asked if they could come to Iowa and film me here. The very next week.

I wasn't against the idea of them coming here...in fact, I much preferred they use MY dog rather than a rental dog. But at that point, I'd been home a grand total of six days the past six weeks. The cleaning ladies hadn't come the whole time I was gone...not that they would've done anything with the piles of books, papers, and just general JUNK in my office. And while cleaning is pretty low on my list of priorities, it's even lower on my husband and teenage son's list, especially when I'm not around to nag about it. So I looked around my house and thought, "Next week??? Are you kidding me???"

Fortunately, I had more school visits lined up for that next week, so that made a much better excuse than, "I'm sorry, there's no way I can get my house clean enough for you by next week."

We ended up putting it off for a whole month...and finally last week, Greg and Ivaylo came out. They were here Monday and Tuesday.

They had asked me if I had a hair and make-up person I liked to use. I tried not to laugh and then told them I haven't worn make-up in about 20 years. I don't even own any make-up. None. Not even a bottle of nail polish. They said that was okay...they'd find me a local make-up person.

And they did. This is Ally: 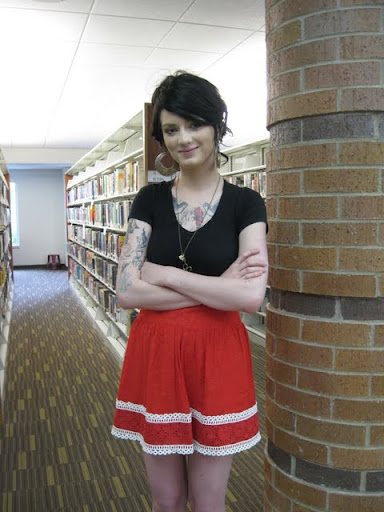 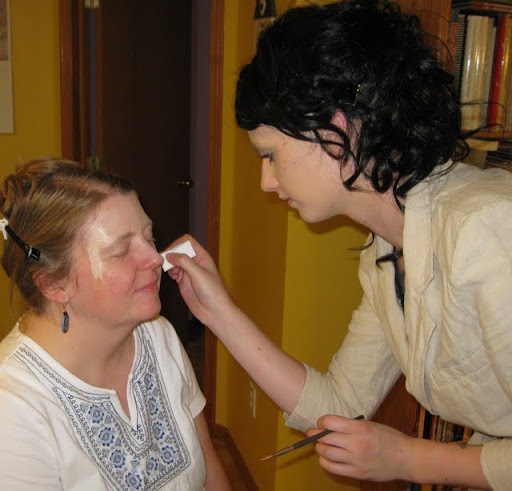 When I went to the mirror and looked at my face for the first time, I sort of freaked out. The words, "Oh, my God! I look like a little old lady" sort of popped out of my mouth. Yes, they did.

And poor Ally was so concerned. "What do you mean?" she asked, immediately at my side.

All I could do was gesture. I didn't know what I meant; I just thought I looked...OLD! (And of course she's probably thinking, "Lady, you ARE old!") And all of a sudden I realized I had just insulted her TERRIBLY. I didn't mean to. I mean, she'd just spent all this time on me. And she's an ARTIST. And what do I know about make-up? I knew I was going to look different...I knew a little make-up for the camera was a good idea. So I tried to apologize and tried to explain that I'm just not used to seeing myself like that; that it's fine, really it is... 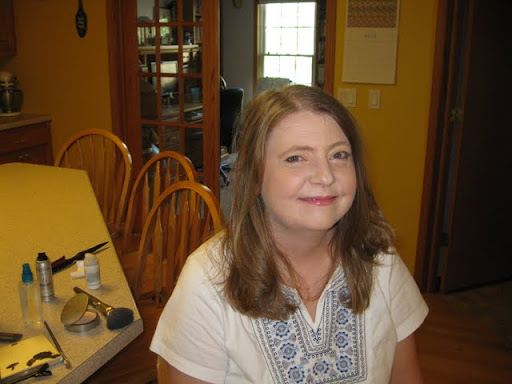 ...and then off we went to Witty Kitties to visit Hockey, the blue-tongued skink who was my inspiration in the Case of the Library Monster: 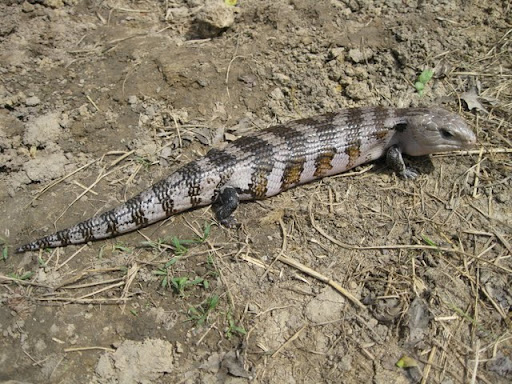 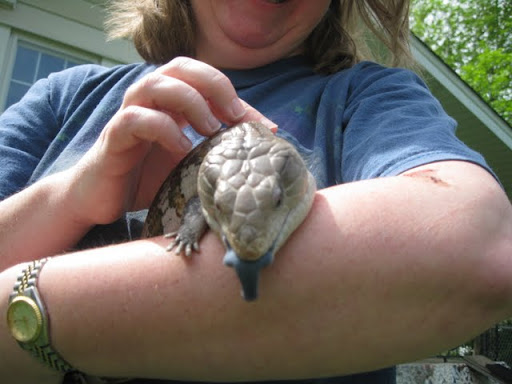 Holding Hockey helped relax me a little (emphasis on little)...and it was a lot of fun showing these two guys from New York City a place like Witty Kitties...and introducing them to Lex, the alligator that some idiot college student thought would be fun to have here in IOWA, until the alligator got too big for his bathtub...(I think they should come back and do a video or five of Witty Kitties! There are a lot of stories out there!). Neither of these guys had ever even heard of a blue-tongued skink before much less seen one. I was an awesome tour guide when the camera WASN'T rolling. When the camera was rolling, I got nervous. Really nervous. I am much more comfortable behind the camera than I am in front of it. But hopefully they got some good video.

Next we went to the library, which was actually closed for Memorial Day, but the teens were in there setting up for the summer reading program. Which was GREAT because Greg wanted to stage a teen book discussion group for the video.

By the way, if you think I'm exaggerating about how different I look with make-up, take a look at the reaction I got from these guys when they saw me (one of them is my son): 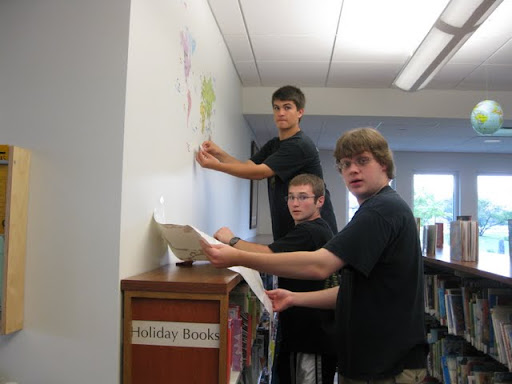 We also staged a R.E.A.D. session with my dog, Mouse, while we were at the library. My husband brought him in and my friend Jonni brought her adorable twin daughters. I wish I had pictures of both the teen book discussion group and the R.E.A.D. session.

And Jonni's daughters were wonderful, too! Jonni told me later that one of her girls had said she was glad Mouse was nervous because she was nervous, too. That surprised me...I never would've guessed either one of them was nervous. Except when Greg asked which one of them wanted to read first and they each pointed to the other.

It wasn't a typical R.E.A.D. session because Mouse paid more attention to Ivaylo (who kept pointing a camera in his face) than he did to Jonni's girls. But he did settle down and listen after a while.

Then we quick headed to the park (after I went home to change clothes) so Greg and Ivaylo could get some film of me and Mouse as the sun was going down. 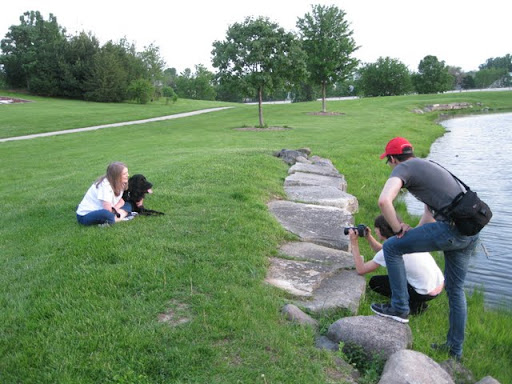 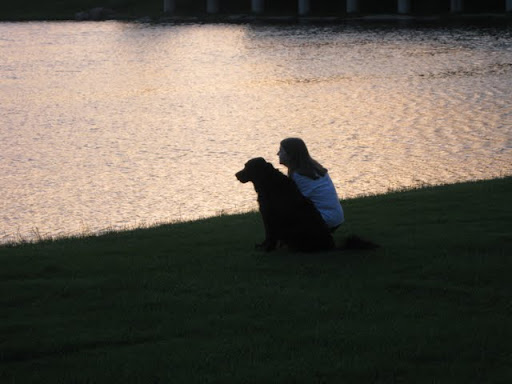 Then we "wrapped" for the day.

The next day, it was back to the library. This second day, we were joined by "John," a local photographer who was hired to photograph the film crew: 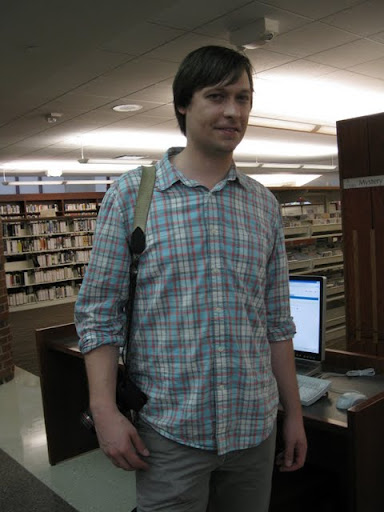 Ally came back and worked her magic on my face again. I promised her I wouldn't freak out today (and I kept my promise!).

Several of my writer friends came, too, to stage a write-in. Greg didn't like the space we normally use for our write-ins, so he had us go to the tables in the main part of the library, which was interesting because the whole reason we started meeting in the downstairs meeting room was because we'd been "shushed" one too many times up there. And Greg actually WANTED us to talk rather than simply write. 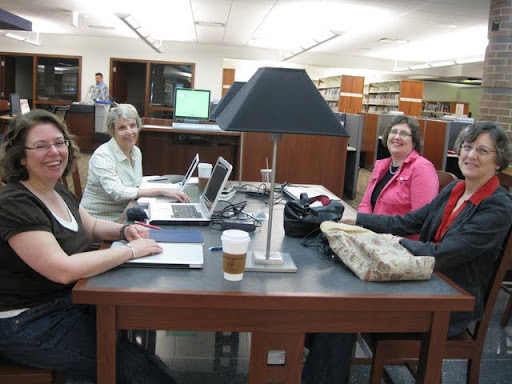 Greg told us to do this, do that...and when he told me to flip my hair over my shoulder, my friend Cheryl burst out laughing and said, "It was worth coming just to hear them tell you to do that!"

So now I was starting to have a little fun, which was good because that made me more relaxed for the formal interview part of the video. After I changed clothes again, and got my make-up touched up again, I waited for Greg and Ivaylo to finish converting my office into a studio. 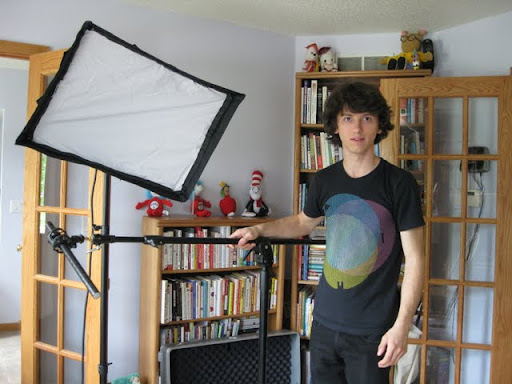 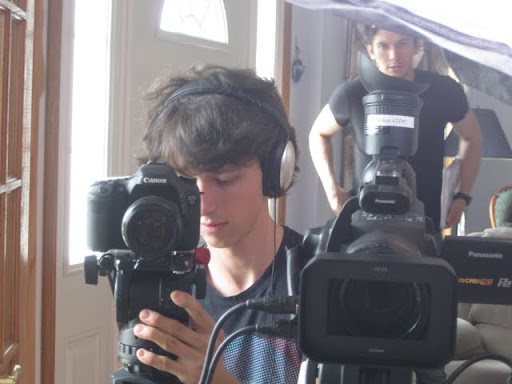 Somebody said to me, "Wow, that dog never really leaves your side, does he?"

Unfortunately, it was a really hot day...and we had to turn the air conditioning off because it made too much noise on the video. I was also nervous they were going to make Mouse leave, but he laid there pretty still. I warned them that if we have to send him away, he might bark. He doesn't like to be separated from me...and he doesn't like to be away from the action.

Everything was fine until the cat wandered in and started pestering Mouse. But John decided that would be a good time to take Mouse outside and get some shots of him alone. So that's what he did...and then Greg and Ivaylo were able to finish my interview.

Next they had me go out to my back porch and read. Mouse, of course, followed and sat down right beside me. But Greg decided he liked that. Then Greg asked if I could get Mouse to look at me. Well...not when he's stalking some critter next door.

Finally, I changed clothes one more time and went outside to play with Mouse. And then that was it!

I really did start to have fun by the end there...quite a bit of fun, actually. Greg and Ivaylo (and Ally and John!) made it fun! In fact, I kind of wished we could start the whole thing all over again. Now that we're all good friends, I know I'd be much more relaxed if we could just do it all again. But Greg assured me I looked very relaxed the whole time. He said that if I'd seemed "stiff" he would've stopped the camera and we would've done something else.

So now I have to trust them to turn all that film into something interesting and worth watching...
Collapse