I love games! I play a mean game of Scrabble (better not play with me unless you regularly put down words like “ai,” (a three-toed sloth), “jo” (a sweetheart), or “qadi” (a Muslim judge)). Scrabble is probably the only “mainstream” game I play. Most of the games I play are games the average person has probably never even heard of. They’re not games you find at Target; you have to go to a specialty games store to find them. Here are some of my favorites: Dominion, Killer Bunnies, Power Grid, Opus Dei, Arkham Horror, Citadels, Gloom, Agricola, Pandemic, Roll Through the Ages, Puerto Rico.

I had an opportunity to help create a new game a few months ago, and I jumped at the chance. I had no idea what kind of game it was, what the object was, nothing. They didn't even tell us what the game was called. I received an e-mail every day for two weeks. The e-mail contained a bunch of random questions like "name the first 10 U.S. states alphabetically" or "list the members of the The Munsters TV family" or "list the ingredient in French toast." (Lots of lists!) And I was supposed to answer the questions the best I could off the top of my head (no fair looking things up). I assumed it was some sort of trivia game, but I really had no idea.

Well, apparently the game is done. I just got my free copy. It's called ZERO and here it is: 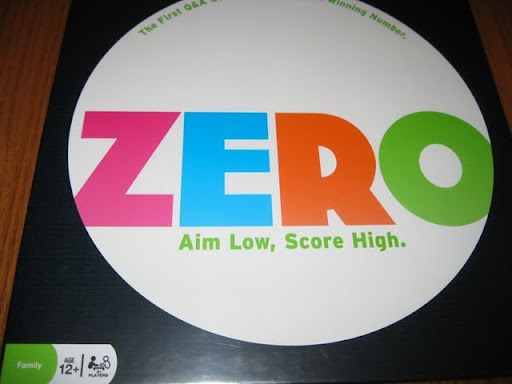 My name is even listed as a “contributor” on the inside. That’s almost as cool as having your name on the cover of a book!

So what’s the game about?

According to the back of the box, “Zero is a new and exciting family game that asks players to search their minds for the “least popular” aspects of pop culture.”

And they let ME contribute to it??? You’d be hard pressed to find someone who knows less about pop culture than I do.

It’s not Arkham Horror, but I’ll give it a try.

They clearly appreciated my contribution (such as it was)…I’ve been invited to be a “University Games Ambassador,” which means I’ll have more opportunities to help develop new games. Cool!
Collapse